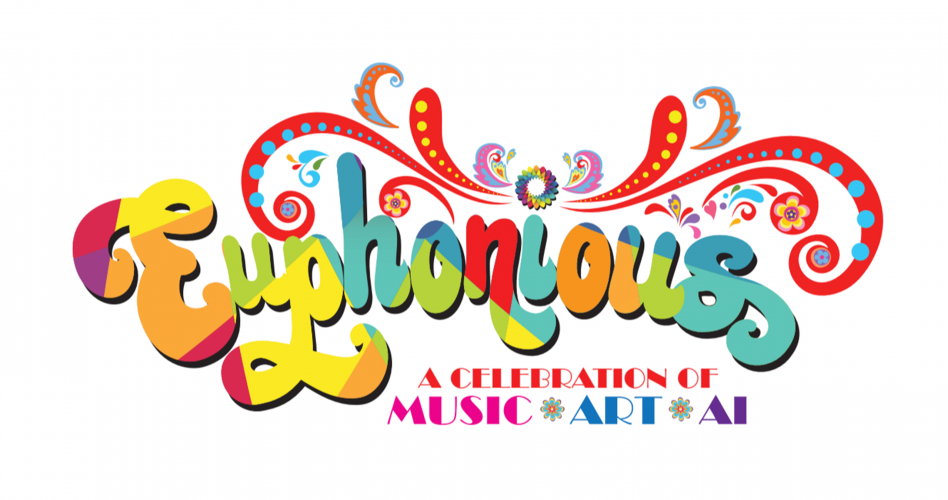 Zoo Culture and the Art of Becoming a Band 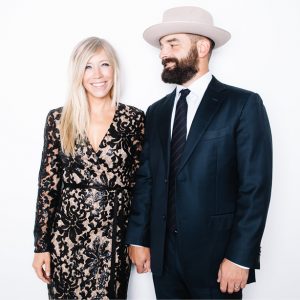 Summer has rolled into the Magic City, and there’s a new festival on the block that we’re proud to partner with in bringing live music back to Birmingham. Residents of Birmingham have attended a plethora of festivals that ultimately have not stuck around; City Stages brought legends such as James Brown, OutKast, The Killers, and Bob Dylan to downtown from 1989 to 2010, and more recently Sloss Fest took over Sloss Furnaces with acts like Modest Mouse, Alabama Shakes, and Arcade Fire in the summer heat (and rain). Euphonious is both a word meaning “pleasing to the ear,” and also the name of a new festival going down at the Birmingham Zoo June 18-20. With Drew and Ellie Holcomb, Moon Taxi, and Tonic serving as the headliners alongside a considerable amount of local talent (including our Mason Music Rock Band League winners), Euphonious has the potential to serve as Birmingham’s formidable presence on the national festival scene. 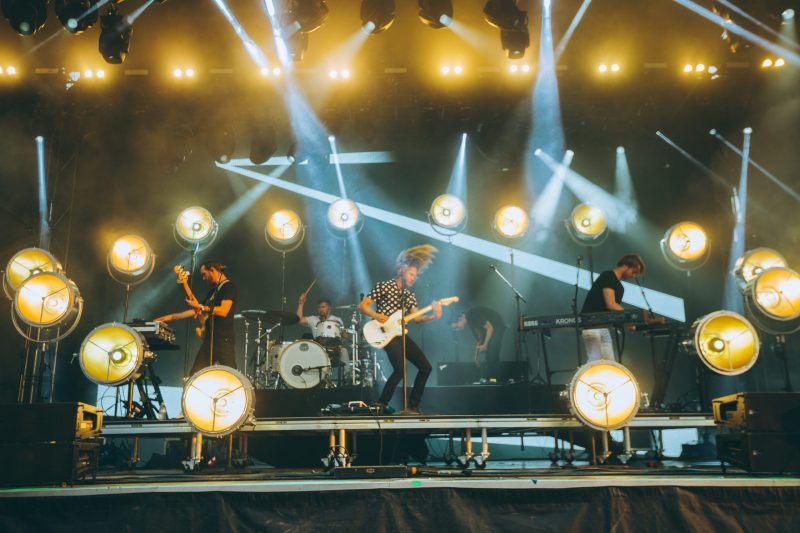 Bradley Metrock, the CEO of Project Voice, knows the history of festivals in Birmingham, and that partly served as a reason to create Euphonious; you can tell that the Vestavia Hills native has some hometown pride in his creation. “I grew up going to City Stages, and I always said that if I moved back to Birmingham, I would want to have a hand in helping to fill the City Stages-sized void in the city. Euphonious is an initial step in that direction.” The name is an intentional way to promote the festival — Metrock shared that “Originally, we were going to come up with a fake word to be the name, like a Bonnaroo or Lollapalooza. But when I found ‘euphonious,’ it seemed to fit perfectly.” I suppose now is a good time in this post to address the elephant in the room — do we even know how to “festival” anymore? Euphonious is one of the first festivals to come back after a long year without them; thankfully, they have clearly thought out how to put on a festival experience safely with the implementation of concert squares across the festival lawn. You and up to 7 of your closest friends will have the opportunity to purchase a 10’x10’ square on the newly-renovated Henley Park Concert Lawn where you can kick back and enjoy the sound of live music. This COVID-centric approach was a part of the planning process for Euphonious from the very beginning. When asked about what it was like to plan this event during the pandemic, Metrock told me that “Once we realized outdoor events were safe, we knew we could start planning. The availability of the vaccine has helped even more. The biggest thing was finding a venue that believed in what we wanted to do. We found that with the Birmingham Zoo.” 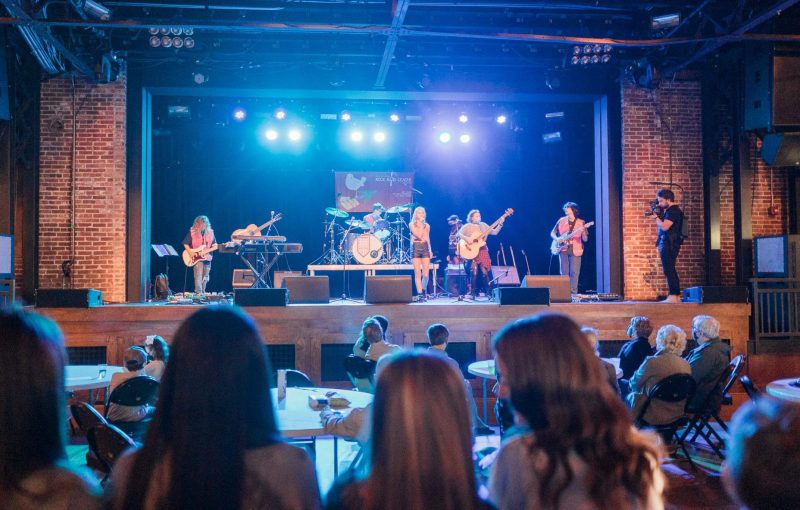 As previously mentioned, the lineup is both incredibly diverse in its separation over three nights as well as intimately tied to Birmingham. The headliners of Drew and Ellie Holcomb, Moon Taxi, and Tonic are big draws for sure, but the undercard is especially exciting. Our own Mason Music Rock Band League winners Revolution (Friday) and Traffic Jam (Saturday) will have the opportunity to rock out in front of the festival crowd to open up the first two days of the festival. Our Rock Band League offers students and non-students the chance to create their own band, receive coaching from our awesome coaches (many of which are also teachers at Mason Music), and play Birmingham’s renowned venues like Iron City and Avondale Brewing Company on their way to a season-ending Battle of the Bands competition. Simply put — these students rock, and we’re incredibly proud to see them get to open for these acts and encourage them to continue on in their musical endeavors. Beyond that, the debut performance of Laboix (Friday) featuring Vestavia Hills native and now-Nashville songwriter Hugh Mitchell, as well as Birmingham native and Brook and the Bluff collaborator Will Boswell (Sunday) provide the foundation of a festival rooted in hometown ties. This eclectic gathering of artists was intentional, per Metrock, who shared that “We wanted to find bands that were great live performers, regardless of genre.” That’s wildly present in the lineup, as bands like Moon Taxi (who are also Vestavia Hills natives) and Sister Hazel are widely renowned for their live energy and ability to get crowds on their feet. 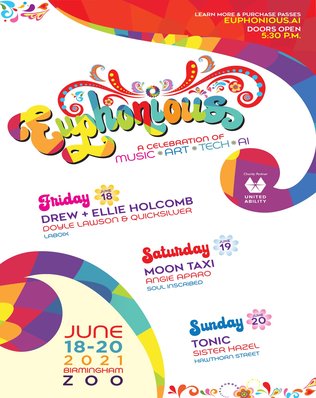 Another important aspect of Euphonious lies within its partnership with United Ability, a local nonprofit dedicated to “connecting people with disabilities to their communities and empowering individuals to live full and meaningful lives.” This inspiring vision made United Ability a fantastic charity partner for Euphonious, according to Metrock: “We partnered with United Ability because they do such amazing work for disabled folks, both young and old, and help make their lives better. I love their mission, and love that they are such great ambassadors of Birmingham just like we hope Euphonious becomes, over time.” A portion of proceeds from Euphonious along with 100% of the revenue from a special after-party will go to funding United Ability’s mission and the various programs that they implement throughout the city. Additionally, Euphonious will introduce Project Voice’s technological collaborations with companies like Amazon and Google to Birmingham, further advancing the Magic City’s growth in the business sector. Project Voice “works with voice technology and AI on a daily basis, and the mainstream voice assistants like Amazon Alexa, Google Assistant, Siri, etc. are often used to play and discover new music. Thus, there’s an interesting overlay between doing a music festival and all of the companies, large and small, that we work with all the other days of the year.” This forward-thinking approach is ultimately inspiring and suggests that Metrock and Project Voice aren’t anticipating Euphonious to be a one-and-done festival.

For now, you can get your tickets to this weekend of live music here, and you can read more about the festival as a whole at Euphonious’s website. We’ll be there over the weekend to support our students and talk to festival-goers about our 10 Weeks of Summer and various summer camps (which we’re so excited for!) and we hope to see you rocking out at the Birmingham Zoo on Father’s Day Weekend!