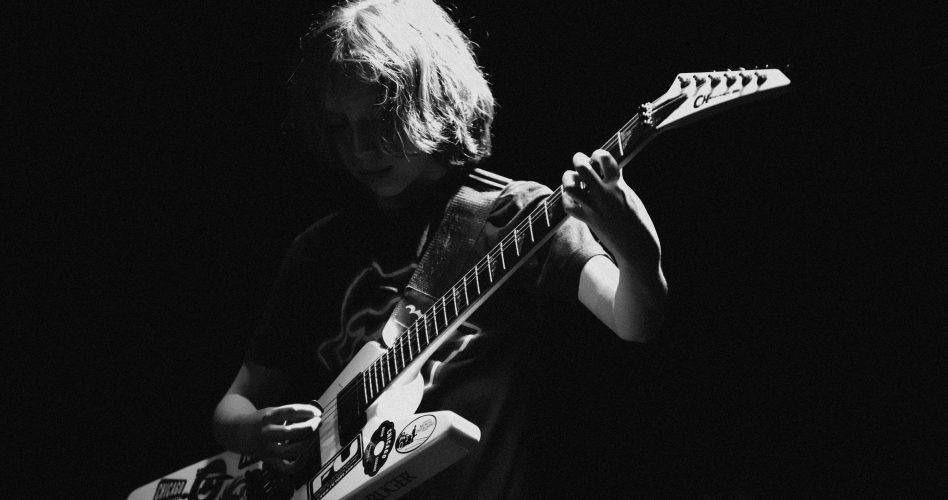 On Tour: An Interview with John-Mark Dorough

Ah, the 80s – what a majestic and turbulent decade. Even today the era still leaves us with feelings that fall somewhere between the warm fuzzies of a John Hughes flick and the confused reactions to the wild antics of Prince (or the artist formerly known as Prince…or that really weird symbol thing). It was Old Coke versus New Coke (and Pepsi Free). It was Reaganomics and a Cold War. It was Axel Foley and Marty McFly – and who could forget those loveable Goonies? So much to remember, and all of it living among these new sensations of tiny records that they called “CDs” and something on the tube called “the MTV.” Quite simply, it was the age of excess.

And the music of the 1980s certainly lived up to that namesake. There’s just so much that our current music is still shaped by that came out of this fabulous decade. The vocals were loud and incredibly high. Suddenly, you could attach almost any effect to a snare drum (I mean, why even use drums at all? Just use a drum machine!). Keyboards provided synth parts that came to truly define how we watch movies and television (Miami Vice, anybody?). And the guitars … oh my! The hair metal genre rushed in, the shredders were in the spotlight, and the textural guitarists were laying their own foundation, even the straight rockers were still royalty.

We finally hit the 40-year anniversary since the 1980s kicked off (that can’t be right, right?) in 2020. So, to celebrate, here are 10 of some of the most iconic guitar riffs that the 80s bestowed upon us.

A few notes on the selection criteria:

So, with all that in mind, I simply sought to find 10 of the most iconic riffs that seem to capture and sum up classic 80s guitar playing (it is by no means thorough, and there are countless guitarists, classic hooks, and even steady genres that have been left out). After making a decision on the 10, I have basically put them in descending order based upon my own preference in sound, style, and playability.

So, without further ado, here are my top 10 iconic riffs of the 80s: 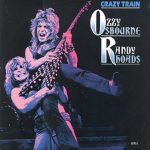 Taken from Ozzy’s debut solo record, Blizzard of Ozz, after his departure from Black Sabbath and featuring guitar wizard Rhodes’ blazing finger-tapping solo and a wild pedal point-esque verse riff, this song oozes shiny guitar work all over. But it’s that iconic opening guitar line that stands out in everybody’s mind (it really does kind of sound like a train with its F# Aeolian constant 8th note pulsing), as it locks into that 2nd fret position and makes use of the F#, C# and D notes before the slight pivot happens for the B to the A and G# notes. Get those ring and pinky fingers ready!

I mean, when countless major league baseball sluggers have used that riff as their walk-up music, you know you’ve hit some kind of Super Mario Bowser’s Castle level of iconic, right? 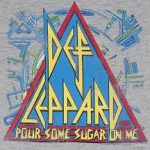 9. Pour Some Sugar On Me – Def Leppard (Guitarist(s): Phil Collen and Steve Clark)

No one can deny this classic riff from the English hard rock heroes of the 80s who also gave us timeless riffs like the ones heard in their hits “Photograph,” “Foolin’,” and “Bringin’ On The Heartache.” It’s the faux-country lick (apparently brought on from producer Robert “Mutt” Lange) that kicks the song off and gets almost everybody in an audience to their feet. And no tuning down on this bad boy – it’s all in F# and based on the C#5 chord for that bluesy/funky (and country!) snap and snarl. It’s all about bouncing that index finger down from C# to B on those 4th frets. 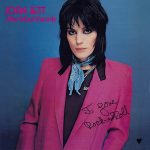 The video game sensation of Guitar Hero owes much to this riff (and to others on the list, of course), and the female rockers of the world owe much to Joan Jett. Alongside Pat Benatar and the band Heart, Joan Jett and the female rockers of the 80s left us all with some incredible songs and earth-rumbling riffs. This riff is no exception with its low E5 chord and the I-IV-V progression being steadily interrupted by the bluesy minor 3rd on a bent 3rd fret of the low E string. And who could forget that catchy minor pentatonic lick that’s doubled across two octaves and shows up in between every line?!?! 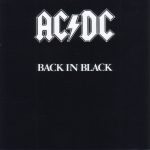 7. Back in Black – AC/DC (Guitarist(s): Angus Young and Malcolm Young)

Maybe this is the most “classic rock” of classic rock riffs, eh? It’s certainly debatable, but what isn’t debatable is how much impact this riff has had on guitar culture and how powerful it really feels when you hear or play this chunky riff. A simple E5-D5-A5 power chord progression that gets spaced out between another high E minor pentatonic riff and a chromatic moving bass lick. Maybe Men At Work gave us the Australian anthem of the decade with “Down Under,” but the Australian rocker Young brothers-based group certainly gave us a ripper of a riff that we all will never forget. 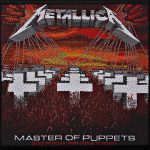 Heavy metal music changed forever after Metallica came on the scene in the early 80s. Their first two albums set a course for all thrash metal guitarists to pick up the speed, but it was their third album, and the title track specifically, that started bringing out the “power” effect of playing low E-string riffs with nasty distortion at breakneck speeds. The Low E is peppered with a massive E5 power chord and then a chromatic D5-Db5-C5 walk down. After that, the madness ensues as the low E just gets a constant palm-muted single note chromatic walk down and develops from there for some crazy creepin’ loudness. Ride the Lightning for sure! 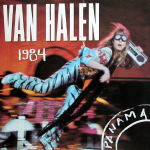 Eddie Van Halen may have done more for 80s hard rock and metal guitar playing with his wild guitar solo piece “Eruption” on Van Halen’s 1978 debut album, alongside the incredible electric guitar riffs all over the record. But after a couple of albums in the early 80s, Eddie had started laying some energy into the group’s famous hooks with his synth playing (might as well “Jump,” right?) and letting his guitar do the talking on all the solos. But there were a few hit tracks from the 1984 album that featured Eddie’s greatest riffing – including this track and “Hot For Teacher.” Here, Mr. V.H. is simply going to town on a heavily distorted C#m chord and gradually pulling it down to some B and A chords (all tuned down half a step, as was his modus operandi). After this, he goes into a tirade on the open position E5-A5-D5 chords for some bouncy blues-rock infused metal. Lace that with those sparkly 5th and 4th fret harmonics across the top 3 strings at the end, and you’ve got it bad, got it bad, got it bad. 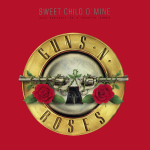 Every guitarist that works in any guitar store the world over might hate this riff almost as much as they hate Led Zeppelin’s “Stairway to Heaven” and a number of others. It’s often on a banned top 10 list of riffs you aren’t allowed to play, and the reason why is because it’s such a good riff that everyone learns it and everyone plays it (and sometimes the early guitarists play it not so well…). Guitarist Slash has claimed that this was a simple string-skipping exercise that got out of hand as a jam at a band rehearsal and thus, a hit was born. The riff almost functions as an acoustic guitar picking riff but all up in the 12th fret position, pulling out the D, C, and G chords for that wonderful Mixolydian vibe you hear throughout the verse. 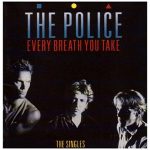 3. Every Breath You Take – The Police (Guitarist: Andy Summers)

This has to be one of the most “80s” sounding riffs that could be on any iconic 80s guitar riff list. In fact, probably any riff or guitar playing by Andy Summers from The Police’s era could qualify for that. The sordid love affair of the trio has most of us usually focusing on bassist/lyricist Sting and his radio and cultural success after the band’s heyday. But so much of the weight of the band’s catalogue is carried by Summers’ playing (and Stewart Copeland’s drumming helped, too, of course). In this riff, Summers is tuned down a half step and is laying down some very stretchy 9th and sus2 chords with a steady palm-muted 8th note arpeggio pattern. Pair that with some chorus and a light slapback delay, and The Police were making plenty of arrests. 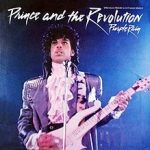 Like the aforementioned Police riff, this one screams 80s. This riff has a rich history due to the album’s connection to the 1984 film and Prince’s compositional style alongside the input from fellow band mates like guitarist Wendy Melovin. The song and riff are built around a simple I-vi-V-IV progression, but the chord voicings are quite challenging and provide great texture and immediate recognition. The first chord is a Bbadd9 (hello again, Andy Summers) and can only be played with a crazy chord shape – index finger barred across the high E and B strings on the first fret, middle finger covering the 1st fret of the 5th string and the pinky covering the 3rd fret of the 3rd string, all leaving the 4th string open to ring out. This makes for an easy transition to the Gm11 chord that follows by simply leaving the index finger and pinky fixed and trading the middle finger out for the ring finger on the 3rd fret of the 6th string (and complimentarily muting the 5th string) while the open 4th string continues to ring out. That same Police-esque chorus and slapback delay seems to be on here too. 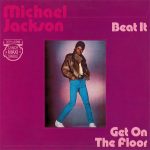 To me, this riff sounds the most 80s out of any riff that came out of the 80s – the whole song is pretty much perfect for that 80s sound. Guitarists everywhere, of course, remember that this is the classic Eddie Van Halen guest appearance on Michael Jackson’s Thriller album for that erratic “street-fightin’” solo in the middle. But it’s Steve Lukather’s riff that starts the song and then his brilliant chords that build up to the solo that truly sell it all. Tasty and simple, the first one is just an arpeggio of an Em7 chord on the Low E string – it’s like walking down an open position G chord with a Low and a middle E peppered in. Then of course there’s that cagey 7th that comes in as the F# on the 4th fret 4th string walks down to the E and open D. Magical! And the bouncy chords in the 12th and 10th fret positions shadowing Em and D chords prior to the solo can’t be beat for a formula of simplicity and rhythm.

Watch 25 of the most iconic classic rock electric guitar intros woven into 2.5 minutes!

How To Set Up A Drum Kit In 20 Minutes On Tour: An Interview with John-Mark Dorough
share this: