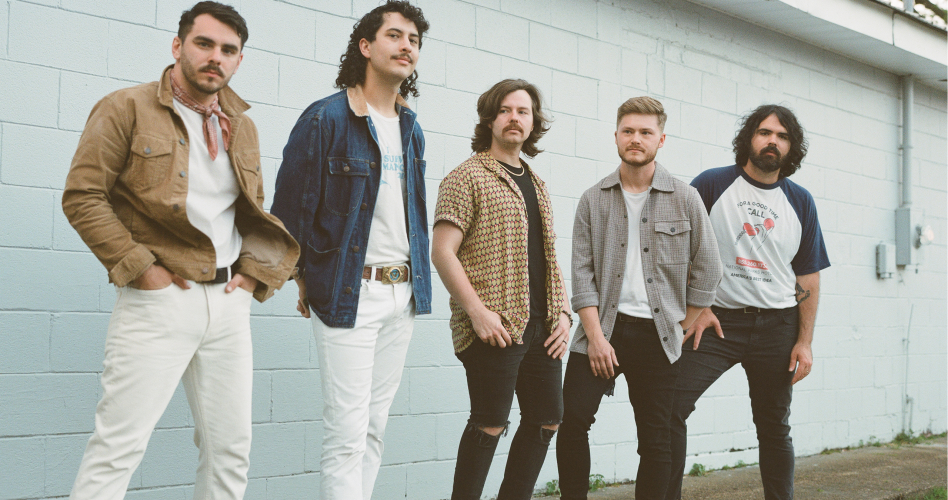 Ones To Watch: The Youth Movement in Birmingham

Catching Up With Carver Commodore

If you pay attention, Carver Commodore has the real potential to be your new favorite band. Comprised of lead singer and guitarist Payton Pruitt, lead guitarist Phillip Blevins (who is also a long-time member of the Mason Music family as Assistant Operations Manager), multi-instrumentalist Clayton Christopher, bassist David Smith Jr., and drummer Noah Freeman, Carver Commodore has maintained a consistent upward trajectory in spite of the absence of touring in 2020. After releasing their debut single in 2017, the Florence-based band has consistently won over audiences with their style of rock and roll that blends the sound of the early 21st century garage rock bands (think The Strokes and The White Stripes) with the soulful voice of lead singer Payton Pruitt that pulls listeners into their music headfirst. 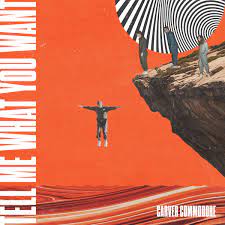 The release of their debut album Tell Me What You Want in 2019 led to increased national notoriety and an appearance on the renowned Audiotree Live series — a rite of passage for buzzy bands as they make their way across the country. Known for their relentless touring schedule, the band has gotten back into shape after a year off with a regional tour this past spring and, more recently, a backyard house tour that served as an attempt to quieten down the Carver Commodore sound. It wasn’t meant to be, though, as rain seemingly followed them to every date of the “acoustic” tour, creating an opportunity for listeners to catch the raucous energy of Carver Commodore in an extremely intimate setting. With the conclusion of that tour this week, they just announced a massive show at Saturn Birmingham on September 16 with local favorites Zion Goins and Moxie Hotel that you can buy tickets for here. I caught up with them the day after their Birmingham show to chat about the recent tour and what’s to come this fall:

How’s the tour been?
David: It’s been great, the rain’s been the most annoying part! I think we’ve all realized at this point that we’re not an acoustic band. It started as us doing this campfire thing, super vibey and-
Payton: Yeah, we just got sick of it. (laughs)
David: We’re just a loud rock band! So it’s been nice to toy around with it a little bit, but the rain pushing us inside for most of the tour has actually been fun because we get to be really loud in these tiny spaces.

Did you put together new arrangements for this tour?
Payton: We did — but rain had different plans. The rock and roll is too ingrained in our hearts. We tried to stick with them for the electric nights though!
Noah: At the end of the day, Carver came out of a more acoustic project that Payton and Phil had before, and the point of Carver was to play loud rock music, so we’re just doing what we want to do.
Payton: The reason we did this tour was because we booked it and planned it when COVID was a lot more intense, and we thought “this is something we can definitely do in a safe way,” and then things changed so we’ve just been embracing it. 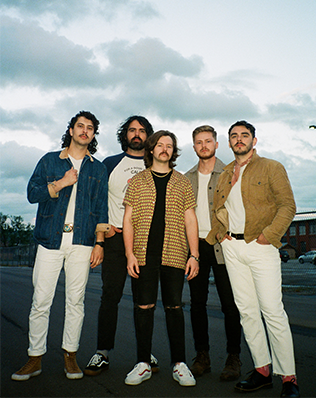 Like Noah said, Carver initially started out as an acoustic project. Can you lay out how you guys shifted into the band that you are now?
Payton: Phil and I used to be in another band that was like, more acoustic folk-rock stuff because that’s what was popular at the time. And we tried it for a few years and had a good time playing with our friends, but we wanted to do the stuff we’re doing now — so we finally decided to just do it right around the time that old band broke up because everyone moved to new cities. It was just the two of us and whoever could play bass and drums. Then, Noah joined playing drums with us, Clayton came on soon after, and then David is the newest member of the band. I feel like we’ve finally got to the right lineup, it’s just taken three years.
Phil: These guys are in it to win it.

You’re coming off of this house tour to do another run with Whitehall in the fall. Is there a difference in how y’all approach both of these tours?
Payton: We did literally everything for this tour — booking, promoting, set up and bring sound, you name it, we did it. We just started using a booking agency this year, and it’s been a huge relief — it’s a lot of work to put this stuff on, and it’s nice to do the regular touring stuff.
Phil: The house tour was very crowd-sourced too! That’s how we ended up playing in Lexington and Indiana; we just had friends up there that wanted us to play, and we might not have played there normally if not for our friends.

Y’all also just did a run of dates at Cedar Point, right? The amusement park? How in the world did that come together?
Payton: Oh man, we just applied for the band-in-residence thing and then they accepted us.
Clayton: That was another thing that was COVID-instigated — we were just looking for places to play and that popped up and we just went with it.
Payton: It was fun, but man it was tiring.
Noah: Five sets a day for five hours — thirty minutes a set, thirty minutes off.
Payton: The biggest thing that we need Cedar Point to know if they ever read this interview, which I’m sure the CEO will read: we need a fast pass. (laughs)
Phil: Coaster freaks have got to get on the coasters, you know?

With all of the touring you’ve done, what places do you enjoy playing the most?
Noah: All of the hometown shows are the most fun — Birmingham last night, for example, and Florence is always wild.
David: On our last tour, Huntsville [at Gold Sprint Coffee] was wild. That was nuts — one of the best shows we’ve ever played. People came out and packed it out; if someone was in a coma during COVID and woke up to come to that show, they wouldn’t have known COVID existed!
Payton: There’s so much we’re excited for in the fall, though. This show at Saturn is going to be great.
David: I think that’s the one that’s in the back of our minds right now.
Phil: Last time we played here it was two days before I got married, and we were a totally different band — it’s going to be awesome to tear up that stage again.
Payton: Coming back with a vengeance — punch them in the face.

What’s coming next for the band, apart from the touring?
Payton: We recorded a new record last year, and if all goes according to plan, something good will be coming out in the fall.

With that new music, what was the writing process like?
Payton: We’re pretty straightforward in how we approach writing. Typically, it’ll start out as a barebones idea — me and a guitar — then from there we track a demo in Logic or GarageBand, and then it goes to the rest of the band to add their own flavor to it.

Do each of you you have a favorite song from your discography?
David: I know this isn’t a fair answer, but I’m really enjoying playing these new tracks live. We busted out a couple of them on this house tour, and they’ve become my favorite songs to play live.
Payton: I think all of us are looking forward, because we’ve played all of these old ones for so long that it’s fun to inject some new blood into things.
Noah: For me, an old one is “Black Plastic.” That just goes hard every time.
Phil: That one was really wild last night — people singing along and everything. 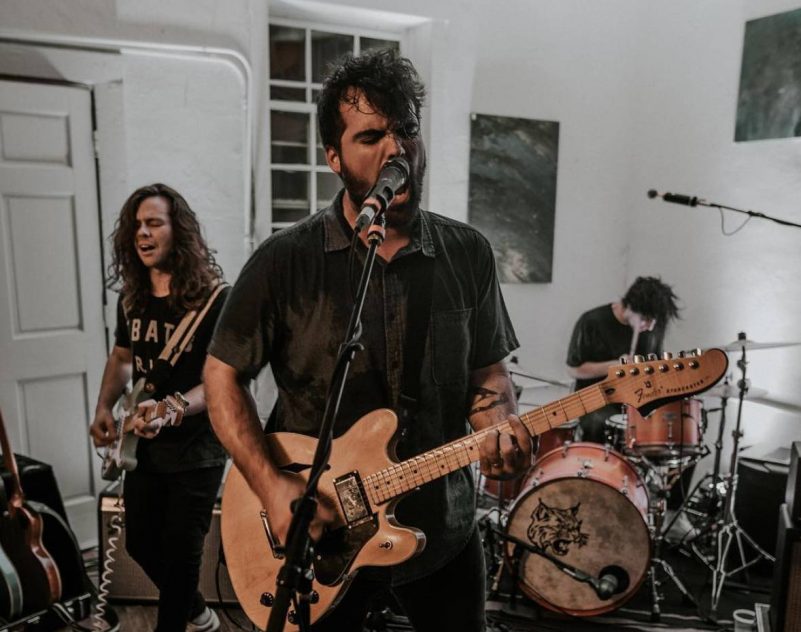 Y’all pretty regularly associate yourself with up-and-coming acts by inviting newcomers on tour — do you have any advice for newer bands and musicians coming onto the scene?
Payton: In some ways, it still feels like we’re pretty up-and-coming too. I would just say start early and keep pushing.
David: Practice like you’re the worst musician ever and perform like you’re the best musician ever. That’s how I try to think about it; the only time I try to exude that confident, better-than-everyone energy is when I’m in front of the crowd. But right when I step off the stage, I’m back to being the worst musician, constantly needing to get better in every aspect.
Phil: I think too, learning how to move on from bad news is incredibly important. We always get rejections and “no” emails, even now that we’re on the road more regularly. But you can’t let that dwell too long — you’ve got to move on to the next thing, because someone’s going to dig what you’re doing at some point down the line.
Noah: I feel like at this point when we get news like that, we just hold onto it almost to spite them. We carry that chip on our shoulder to keep getting better.

Mason Music Foundation Stories: Sam Newton Ones To Watch: The Youth Movement in Birmingham
share this: