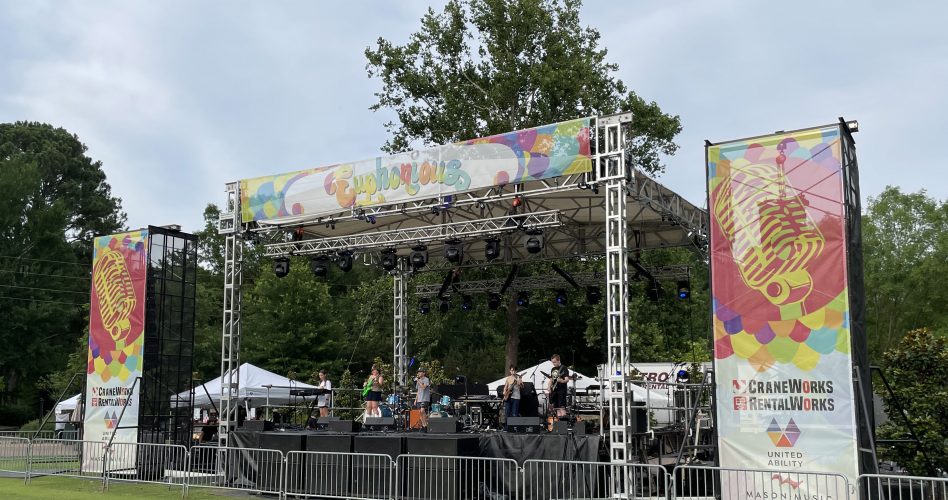 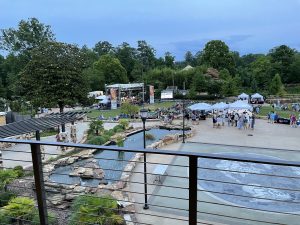 Back in December of 2020, I got an email out of the blue about a music festival that was being planned for June of the following year. The organizer, Bradley Metrock (owner of Project Voice, an AI company), wanted help promoting the brand new festival. I saw an opportunity to get our students on a big stage so we decided to help each other out. I don’t think either of us realized how great this partnership would ultimately become.

On June 18 and 19 this summer, the two top bands from Mason Music’s Spring Rock Band League (RBL) season had the opportunity to perform on a massive festival stage opening for Drew & Ellie Holcomb and Moon Taxi.

Revolution, the winning band from RBL’s ‘openers division’ (ages 13 and under) took the stage on Friday, playing a 3 song set for an audience of concert goers who were surprised at the level of talent out of this young band. Ellie Holcomb (Dove award winner and iTunes Christian chart topper) was even overheard commenting about how good they sounded. 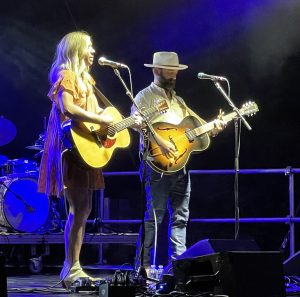 Earlier that day, Mason Music hosted an acoustic lounge where the headlining acts performed a short set acoustically for a VIP live audience to be recorded and released later (a la “Live in the X Lounge”). Our students were treated to special performances from Drew & Ellie Holcomb with only a handful of people present. The musicianship and storytelling from those two is really a sight to be seen and I’m so thankful our students got to experience such a unique moment.

Every time our students get to perform, we look at it as an opportunity for learning. So during sound check, when the front of house engineer asked us to ‘check the drums,’ I called Wade Spooner (12 year old drummer for Revolution) up on stage. “Have you ever done a sound check before?” I asked. “No,” was his answer. “OK, well let’s learn how!” I walked him through the process on the biggest stage he had ever seen, “The sound guy is going to ask for your kick drum. Hit it like this – not too fast, not too slow. Hit it as hard as you normally will during your songs. Next he’s going to ask for your snare, then your rack tom, your floor tom, and finally the whole kit; you can just play your favorite beat for that part.” Wade was a rock star and went through the rest of sound check on his own. I could see his confidence growing! 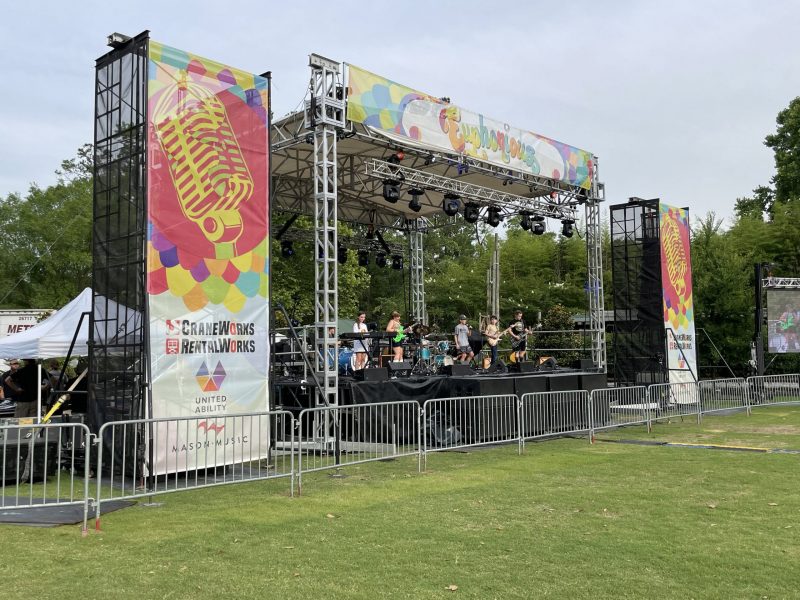 Big Friendly Productions was the company in charge of sound at the festival and they couldn’t have been nicer to our kids – That’s always one of the most fun parts of public performances – people who look at our students and actually give them respect, because they remember what it was like to get on a stage for the first time and they see themselves in these kids. Inevitably, the production crew turns into the biggest fans at the event.

Saturday, our plans were challenged by a tropical storm that was making its way through the southeast. Load in, sound check, and start times were all pushed back. In fact, at one point, we weren’t sure our students would still be able to play. They had worked so hard to get ready for this performance, driven in from various parts of the city and waited around for hours of delays. Thankfully, the team at Euphonious made the call to put our students on stage even if it meant some of the other bands would have shorter sets. 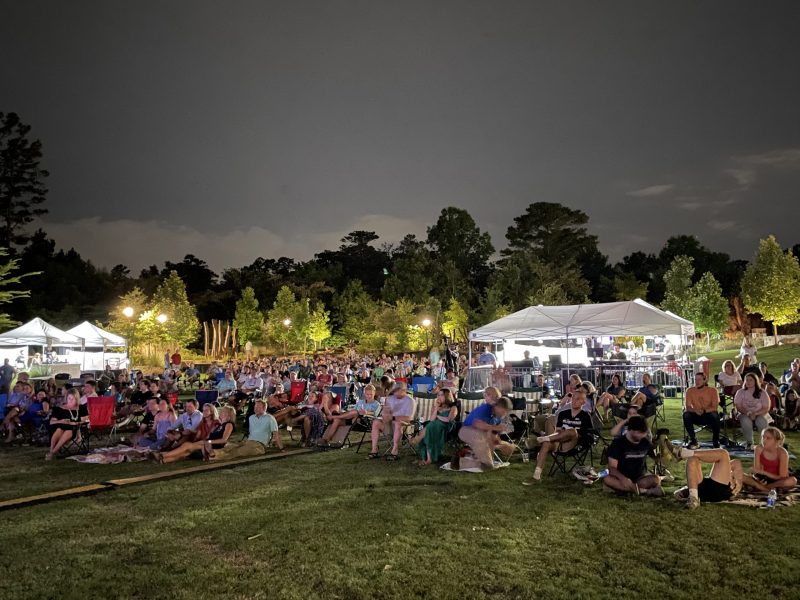 Traffic Jam, our winning band from the 13 and up ‘headliners division’ of Rock Band League, loaded in during a light rain and had a very brief ‘line check’ (abbreviated sound check) before their set began. Due to time constraints, they were only able to play 2 songs, so naturally, they chose to close with “Stairway to Heaven.” The crowd was mesmerized – how could these kids be so good? Members of the stage crew (nicknamed the “Zoo Crew,” of which I was made an honorary member) walked out from backstage to watch these kids shred for 10 minutes. They opened with their cover of Lady Gaga’s “Bad Romance” before blowing minds with “Stairway.” 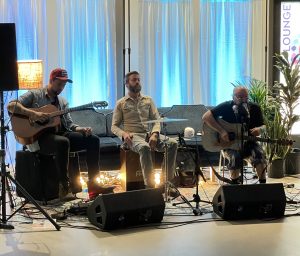 Unfortunately, the rain started shortly after Traffic Jam left the stage, and the following band, Soul Inscribed, had to leave the stage mid-set. The fate of the festival hung in the balance as fans of Moon Taxi were ushered under the pavilion at the entrance of the Zoo in an attempt to wait it out. Tropical storms aren’t generally ‘waited out,’ so the festival organizers were looking at all options, including cancelling for the rest of the night. It was at this moment that a collective realization emerged that Mason Music’s acoustic lounge was still set up from earlier in the day. “What if we move the festival inside and keep the music going?” people began to ask. Thankfully, our A/V tech, Drew Swindle, was still at the festival and willing to step up. He swiftly patched in all of the cables and microphones for the direct support, Angie Aparo, to play in the lounge (previously known as the zoo’s learning center which has a capacity of 150 people).

Angie Aparo played a killer set, turning the learning center into a party when he closed with “Fight for Your Right” by the Beastie Boys.

Moon Taxi was up next, and as the lights were turned down, the crowd lit up. People were dancing in the bleachers, singing along, and generally having a great time. I had my 11 year old daughter with me (also the keyboardist of Revolution), and even she was not happy with me when I told her it was time to leave at 9:45. 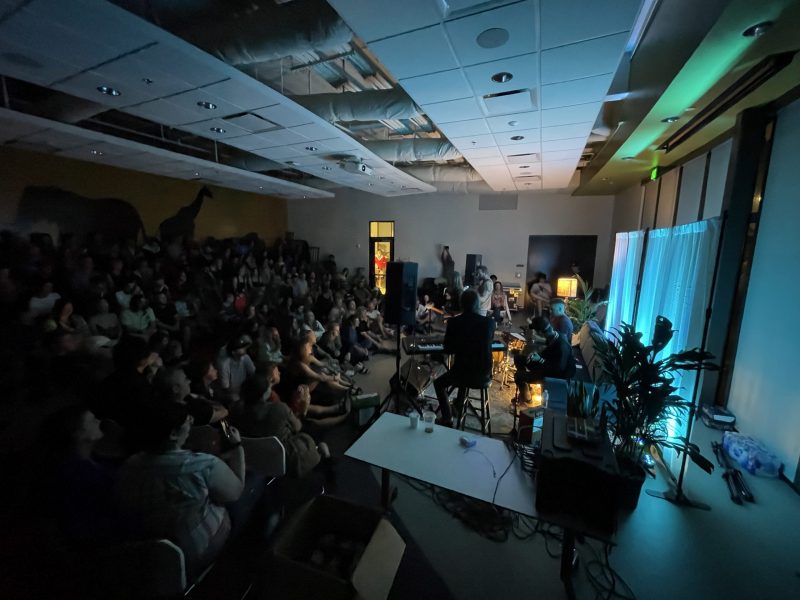 All in all, Euphonious was a bit of magical mayhem. Rushing to come up with plan b, plan c, and beyond, having students perform on the big stage, and managing the acoustic lounge for Drew & Ellie Holcomb, Moon Taxi, Sister Hazel and Tonic was definitely a weekend to remember. We are so thankful for the opportunity to be a part of events like this, and love sharing them with our students and families. We hope to be back at the Zoo next year for the 2nd annual Euphonious!

Ones To Watch: The Youth Movement in Birmingham Euphonious: Birmingham’s Next Great Music Festival
share this: