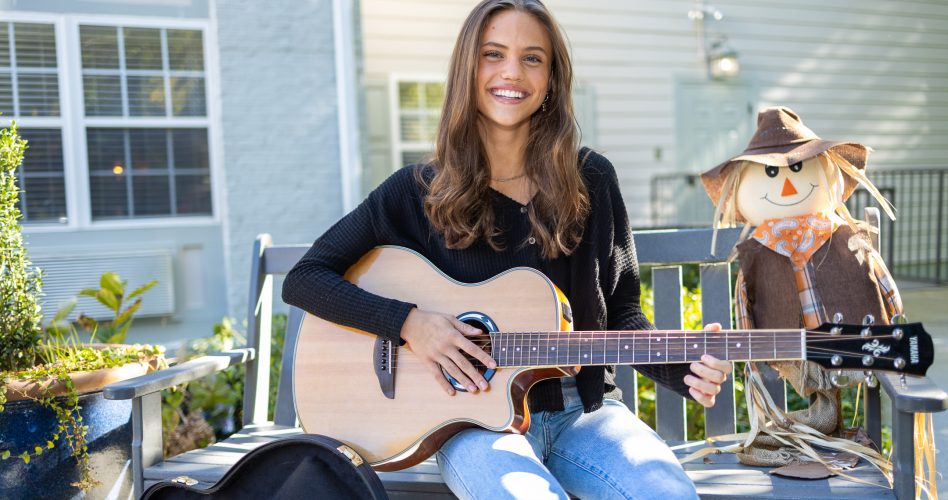 Mason Music’s mission statement has become a sort of mantra for the staff at our studios: “To inspire a growing community of people to be passionate about playing music and to teach them the skills necessary to do so with excellence.”

We firmly believe that music has a transformative power. It might show itself through the smiles that light up on our students’ faces when they conquer a tough piece, the electric energy felt by a crowd rocking out at a concert, or even the warm feeling you get when you hear a song that you love deeply. Our former Rock Band League student Kate Lauterbach has taken that incredible feeling to Atlanta where, at 18 years old, she has brought the power of music to local assisted living homes where residents have been locked down since the start of the COVID-19 pandemic. Armed with a guitar, piano, and her exceptional voice, Kate has won over the hearts of residents through a large repertoire of music that includes everything from Dolly Parton to The Beatles. Kate recently received glowing coverage of her performances in the Atlanta Journal-Constitution, and we reached out to our alumna to catch up and learn about how she’s taken her skills to Atlanta:

You’re 18, literally touring colleges, and you’ve started this really incredible thing. Just so that I don’t parrot what’s already been said, would you mind sharing a little bit about these performances that you are doing?
Basically, I go and do free performances around an hour long at assisted living homes. I play for typical residents that are there because they need around-the-clock care, and I also pop into Alzheimers’ daycares to play for those residents from time to time. I play a myriad of things — guitar, piano, singing — but I especially stick to playing oldies that folks who are in their 60s to 90s would know from their young adult life because that’s what they’d remember the most. 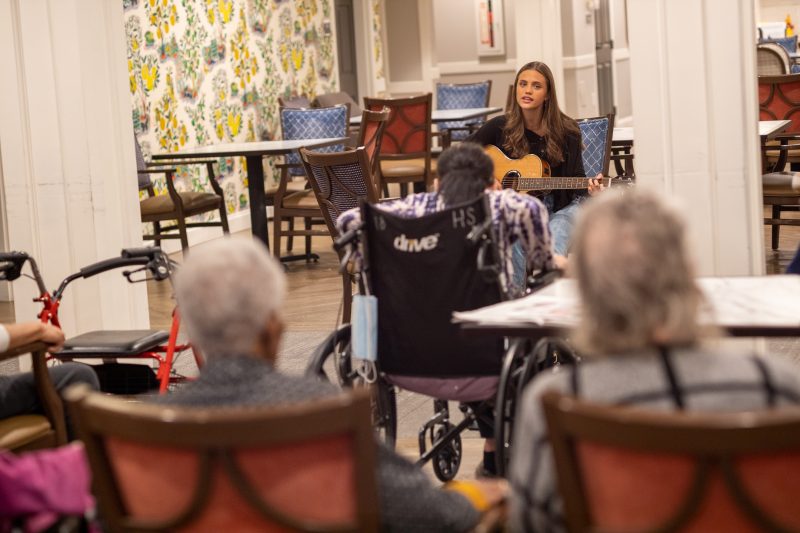 So what is that music, typically?
You know, The Beatles, Judy Garland, Elvis — anything from that period of time.

That’s just so incredibly cool. I know COVID had a bit of an impact on this, just because people in assisted living homes became so incredibly isolated over the pandemic — what inspired you to want to do something like this?
I lived in Birmingham for a long time — up until I turned 16 — then we moved to Atlanta. But before I moved, my grandparents were like my second set of parents. I practically lived at their house growing up; they drove me everywhere I wanted to go, hung out with me all the time, and my grandparents actually put me through my first piano lessons at three years old. They were serious advocates for learning how to play and the power of music, and it completely changed my life. So when we were about to move to Atlanta, they moved into an assisted living facility; after they moved in, they invited me to come play for them because it’s something I’d always do for them —you know, just pop up with a guitar in their living room — and I went to this facility and just had an incredible time. I knew that once I moved to Atlanta that this was something that I wanted to do in some respect once I got settled in, and then once I got settled in, COVID happened (laughs).

Side note — isn’t it so weird that you’re talking about being 16 when the pandemic started, and you’re 18 now? Like, I remember being 21 when we first locked down and I’m turning 23 next week.
(laughs) It’s so weird, man. It’s like a time warp — I can’t believe it’s been that long.

What’s on the horizon for you? You mentioned that you’re applying to colleges right now.
Yeah, the college grind is happening right now. I’m applying everywhere — California, Georgia, a couple others across the country. I don’t know if I’m going to major in music, but I’m definitely keeping it in my life because of everything it’s brought to me.

You started piano lessons at three years old, and I know that you were involved with Mason Music and Rock Band League for a good minute before you moved to Atlanta. What was your experience like with Mason Music?
I knew I wanted to sing in a band as early as sixth grade, and Rock Band League gave me that opportunity to do that at such a young age. I knew a couple of friends in school that could play drums and guitar, and a group of us just signed up to do it together and it was just the greatest thing ever. Mason Music is actually the reason I got into, like, guitar and bass; our band didn’t have a bass player and we couldn’t find one, so I just said “Okay, I’ll learn it!” (laughs) So I bought a bass and just learned it, and it’s been seriously helpful because there’s a shortage of bass players at all times. 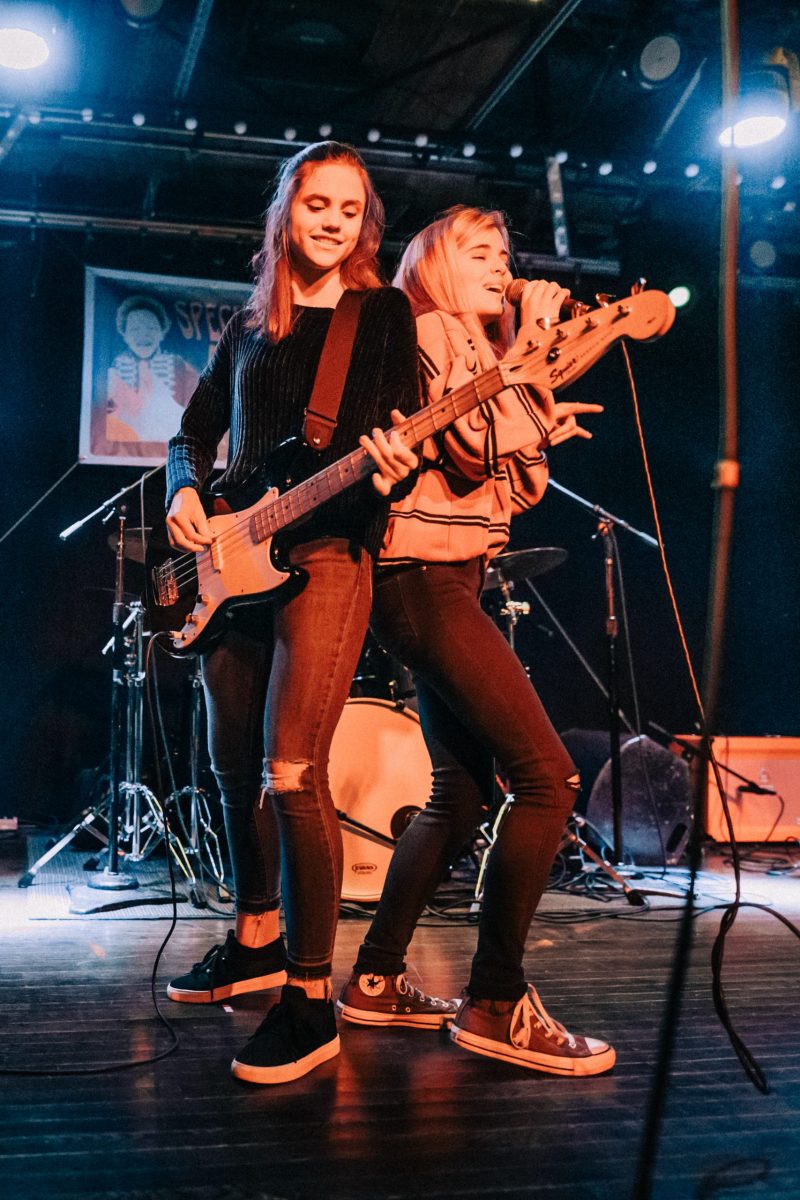 (laughs) You’re so young and you’re learning that already! There are, like, three bassists in Birmingham and they all play in seven bands.
Yeah, that’s true here too! (laughs) So I got involved with Rock Band League early on, and we formed a really good group that stuck through my tween years. It was just an awesome experience — from the coaches, to the venues, to the songs we played, it was just completely formative to what I’m doing with music now. It’s such a unique experience. I think everyone who plays music has that passing thought of “Oh, I’d love to play in a band,” but at 12 years old, you don’t have the resources to put that on! So between providing that environment and the coaching that’s necessary to be in a band, it’s just unbeatable for anyone who might dream of being in a band. 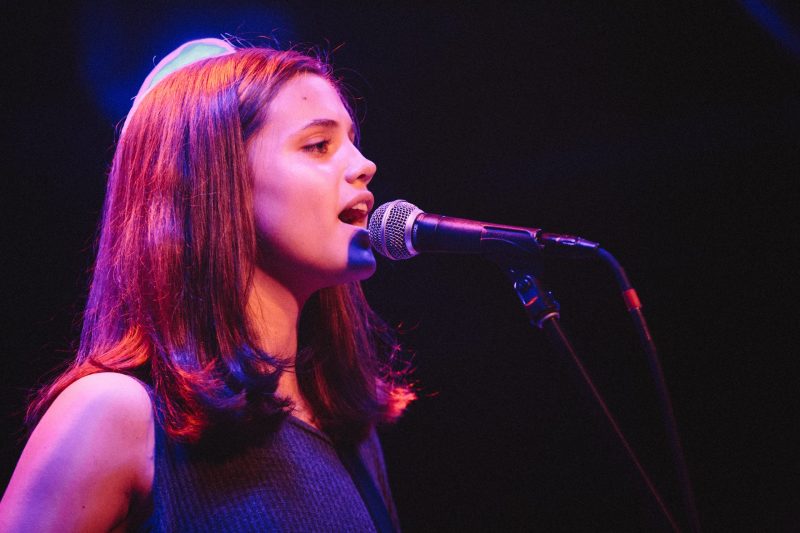 So, with this job that you’re doing — I actually feel weird calling it a job, because it’s this super charitable thing—
Oh, it’s definitely work (laughs). I think of it like a part-time job, because it’s such a huge part of my life at this point.

Okay, so with this job, what’s been your biggest surprise or takeaway from performing in these homes?
I think I’ve learned a lot about myself through this process, because it’s pushed me out of my comfort zone so much. I’d never had to schedule my own performances, or create a website, or set up sound by myself. And then, the connections that I’ve made in general with these amazing people — they’re so isolated, you know? I didn’t realize that when I started, but I was talking to my grandparents over the phone and it made me realize how much the pandemic affected that group of people specifically because they’re so high-risk. Being able to connect with these people in this way as they really need it has been powerful.

Is there a song in your repertoire that wins over the crowd every time?
I have two — “Killing Me Softly” is a big one, and then “Somewhere Over the Rainbow.”

Roberta Flack fan, eh?
I learned it from The Fugees (laughs). I didn’t even know it was a 60s song until I was playing it on the piano and my dad was like “You know that? You should play it at the assisted living homes!” And my first thought was “Dad, they’re not going to have a clue who The Fugees are.” 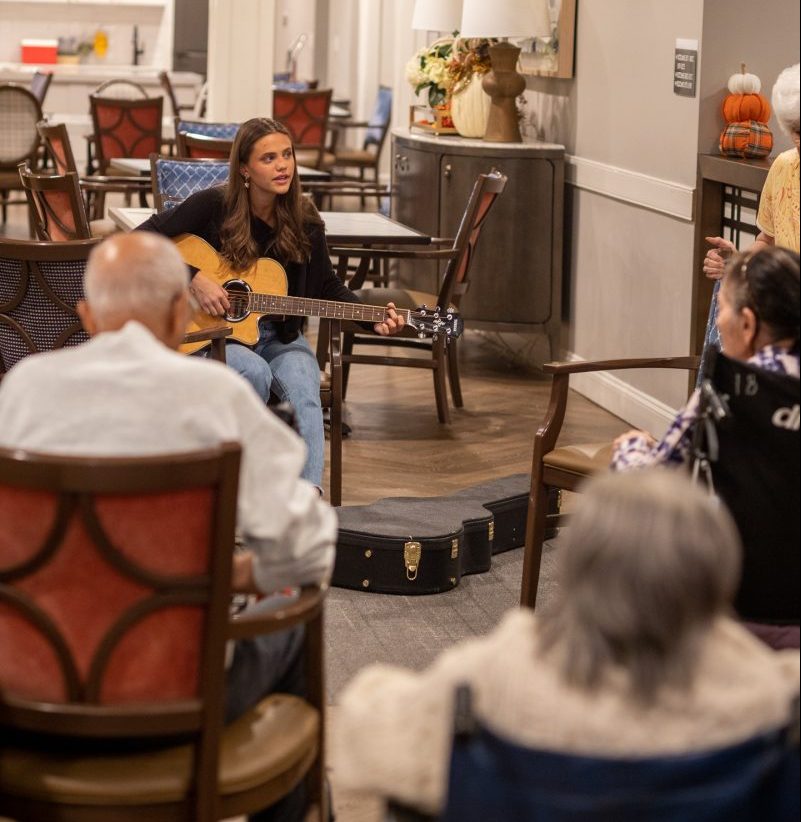 I can remember talking to The Brook and the Bluff recently about covers versus originals, and I’d love to hear your perspective on the power of a good cover song.
I think covers are a blast, and particularly with these folks that might have Alzheimers’ or memory issues, I’ve seen firsthand where just the first few notes of a song can make people glow. When I’m playing, I always introduce the song and say who it’s by, and there’ll be multiple instances where they have no clue what I’m talking about and then I’ll look over and they’re singing along — every single word. (laughs) It does so much good; it’s almost less about the music and more about the memories that can be brought to them through music.